Similarities Between Economic Development and Prostitution


Supply-side economics is a school of macroeconomic thought that argues that economic growth can be most effectively created by lowering barriers for people to produce (supply) goods and services, such as lowering income tax and capital gains tax rates, and by allowing greater flexibility by reducing regulation. According to supply-side economics, consumers will then benefit from a greater supply of goods and services at lower prices. Typical policy recommendations of supply-side economists are lower marginal tax rates and less regulation.

In other words, in order to foster economic growth, it is important that policies are implemented that meet the demands of businesses because ultimately, all wealth is created by business.

This theory is remarkably similar, in my opinion, to prostitution. In the market for sex, prostitutes work hard in order to make money from customers. In order for prostitutes to improve their standard of living, they have to implement policies that appeal to customers, e.g. they have to maintain their appearance. Similarly, supply-side economics suggests that workers and government, in order to improve their standards of living, must prostitute themselves to global businesses. In other words, the Chinese government and its people must reduce its wages so low and demand that its people work so hard so that a company like Nike will be interested in coming over, exploiting the Chinese workers, and paying them for it.

I have been thinking about this issue a little more and have the following to add.

Many people argue that prohibition, whether it is prohibition of alcohol, sex, or gambling, doesn't work. When the US prohibited alcohol, what it found was that drinking alcohol went underground. Organised crime supplied the liquor and made enormous profits. By legalising alcohol, the US government was able to essentially destroy the criminal element in the liquor industry. In the Australian state of Victoria, liquor, gambling, and prostitution are legal but highly regulation. Premises that sell liquor must have a liquor license that it purchases from the state government. The same applies to prostitution. Under the Sex Worker Act in Victoria, there are laws about use of condoms and the frequency by which prostitutes must be tested for STDs. The main argument for tax and regulate versus prohibition is that demand for sex, alcohol, or gambling will never go away. It is better therefore for the government to regulate these industries to allow consenting adults to participate freely but to protect minors and other vulnerable members of the community. Tax and regulate also allows government to earn revenue by selling licences as opposed to all the proceeds of crime being siphoned off by mobsters.


In my opinion, the prostitution theory of economic development works the same way. In the same way that there is a large group of men who, due to their innate sexual desires, will always demand sex, so too there will also be a large group of wealthy people who, due to their innate greed, will always want to grow their wealth. The best way for wealthy people to grow their wealth is to invest.


Instead of prohibiting prostitution, it is better for government to harness the innate sexual desire of men for the benefit of society. By taxing and regulating prostitution, government can collect extra revenue and can allow prostitutes to earn a living and thereby improve levels of employment. In the same way, government, instead of prohibiting the greed of wealth men (i.e. turn to communism) the government can allow wealth men to indulge their greed and invest, start businesses, and employ workers. This allows the government to collect more revenue through various taxes, e.g. company tax, land tax, transaction taxes, etc. It also allows government to harness the greed of these wealthy people (or capitalists) to increase levels of employment. In the same way that men exploit prostitutes, capitalists exploit workers. The benefit of exploitation is that jobs are created. As one economist famously said, the misery of being exploited by a capitalist is nothing compared to the misery of not being exploited by a capitalist. In other words, we are all prostitutes. We sell our talents for money, but that is what puts food on the table and that is what drives global GDP and improves standards of living.


In the same way that government cannot control men's desire for sex, gambling, or liquor, so too government are nothing compared to the power of the international capitalist class. As a result of natural greed, corruption, and so forth, there will always be an elite group of people who control nearly all the wealth. Government do put up a fight, but the existence of tax havens and loopholes make this fight quite futile. The ruling capitalist class will always exist just as men will always desire sex. It is better then for government to accept this and do what it can to sell its people to the capitalists. In other words, if capitalists are like men who are willing to pay for sex, governments are pimps, and workers are prostitutes.

Prostitutes can go it alone and try to get business but there is danger in this. There can be beaten up by customers. If the prostitute has a pimp, the pimp will protect the prostitute but the prostitute must give a certain percentage of her earnings to the pimp. Government is no different. Workers are prostitutes but governments build roads, build utilities, and ports. They build these things to make country to more attractive to capitalists. In the same way, pimps or brothel owners will build buildings, provide condoms, and so forth. These are the essential infrastructure necessary to attract customers and facilitate trade. In the same way that prostitutes pay a proportion of their earnings to the pimp or brothel owner, so too the worker pays a proportion of his or her earning to the government in the form of taxation. In the same way that some pimps treat their prostitutes better than other pimps so too different government treat their citizens in different ways, from the cruel dictatorships to the benevolent dictatorships to the democracies and republics.

What is the take-home message from all this? Communism is prohibition and capitalism is prostitution. If we want higher standards or living economic progress, we must prostitute ourselves and allow ourselves to be exploited.
Posted by Richard Supez at 5:14 PM 1 comment:

Holidaying Cheaper than Staying at Home?

I have started taking two weeks off from work. In a bid to save money, I have decided not to go on holidays. Rather, I will just stay at home. However, I am quickly finding that staying in Australia can be quite expensive and that perhaps a trip to Asia might have been cheaper.

I have only just started my two-week holiday, but already I have been invited by other people to eat out and watch movies. Watching a movie in Australia sets you back about $20. Eating out can vary between $15 to $30. I remember during one day I ate out during lunch and dinner and then watched a movie afterwards. I spent $70 that day.

Return tickets for flights from Australia to a country like Thailand or Cambodia can be purchased for around $500 to $800. The cost of living e.g. in Cambodia is significantly lower. Meals are only around $5 and you can sleep at a guest house for $10 a night. Of course, it all depends on what you do. I am starting to think that if I go to Asia, rent a cheap hotel, and then do what I normally do during a holiday (i.e. surf the Internet) then it might be cheaper to go to Asia.

Another benefit of going to Asia is that I can detach myself from my family and friends at home. When you take a holiday, you are looking not only for a change in scenery but also to get away from your annoying friends and family for a few weeks. I really ought to consider this next time.
Posted by Richard Supez at 12:24 PM No comments:

I don't do any of that. I am in my late twenties and I spent my free time doing things that are quite different to what most people do. For example, during my free time I like to read novels, write, or even do my tax return or spend time with family. Some people think there is something wrong with me, that I should be out with my girlfriend, but I don't have a girlfriend and automatically people think there is something wrong with me and that I should get one.

For a long time I have gone along with it, trying to please others by attempting to do normal things, but all of a sudden I have realized that I don't have to. I don't have to conform and no one can make me. I have to learn how to stand up for myself and tell other people that they cannot tell me what to do.
Posted by Richard Supez at 11:23 PM No comments:

It's great having breakfast, lunch, and dinner, but in between these meals there is always the need for something quick to tame hunger. Something quick that can fill me up include the following: coffee, tea, instant noodles, and Milo. The problem with coffee and tea is that they have caffeine, which is not good when you want to be able to fall asleep at night. Instant noodles have too much salt, which can lead to high blood pressure. Milo is essentially 60% sugar, so stay away if you want to avoid obesity, tooth decay, and diabetes.

I have recently discovered Greenmax Yam and Mixed Cereal. It can be prepared simply by mixing the powder in the satchel with hot water, and you have a very warm soupy beverage. It tastes very nice and fills you up. According to the nutrition information, it is high in fibre and low in salt and sugar. It is an excellent beverage if you are feeling hungry but aren't willing to spend a long time cooking a full meal. It is healthy, tasty, filling, and convenient. 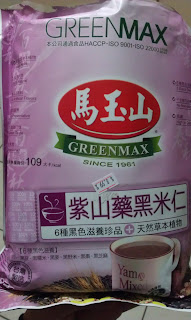 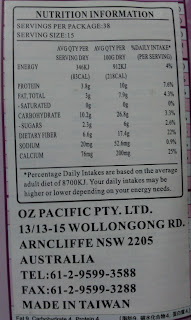 Posted by Richard Supez at 9:54 PM No comments:

The article Mr Money: the most profitable car companies claims that consumers looking to buy cars should consider buying from car manufacturers who are highly profitable. According to the author, these companies, because they are profitable, are able to offer more discounts:


For customers in the market for new cars, it's essential to know which makers are rolling in money and therefore able to lower their prices or offer incentives such as zero per cent finance or free insurance. Equally, it's just as important that consumers know if they're buying from a struggling manufacturer which might be unwilling or unable to offer good deals or even offer a little flexibility on price.

If a company is many enormous profits, a customer should wonder how that company many enormous profits in the first place. There is a good chance that it has ripped off consumers by charging prices that are well above costs.
Posted by Richard Supez at 7:23 PM No comments: