Ted Baillieu, after defeating John Brumby in the 2010 Victorian State Election, has made it clear that he wants to get to work on fixing the state's problems inherited from the previous government by holding a parliamentary sitting day early on 21 December 2010. During this parliamentary sitting day, the new Treasurer of Victoria Kim Wells MP presented the Budget Update 2010-11.

One of the key messages of this budget update is that the size of the Victorian government has gotten too big and is unsustainable. Because of this, the Liberals will need to implement an austerity measure that will see a minimum $100 million net operating surplus achieved per year in addition to an election promise to find $1.6 billion in savings over the next four years.

Page 2 of the Budget Update states the following: "Growth in the size and cost of government threatens to reduce Victoria’s tax competitiveness, without generating any offsetting improvements in productivity." 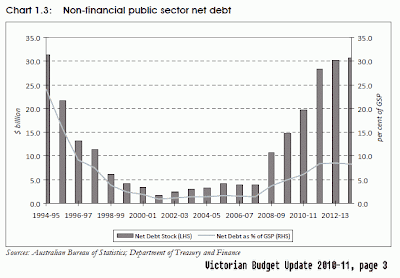 Recent statistics show that public sector wages have increase by 6.3 per cent in the three months from May 2010 to Aug 2010, more than private sector wage increases of 4.3 per cent during the same period of time. (Source: Are We Paying the Public Sector Too Much?)

"On average, public sector employees earned just shy of $60K per year — $8k more if you work for the Commonwealth government. Those working in electricity, gas, water and waste averaged more than $82K per year (no wonder the bills keep going up), compared to those in education who managed $51K."
Posted by Norak at 3:04 PM No comments:

What if the Aussie Dollar Collapsed?

This piece explains that the Australian economy is highly leveraged to the mortgage debt market. Even though public debt in Australia is around 7 per cent of GDP, this masks the massive extent of private sector debt in the country, mainly held by invididuals in the form of mortgage debt.

However, if something bad happens, chances are the government will take over these banks and, as in America, private debt will be nationalized and public debt will skyrocket. Furthermore, foreigners will be less likely to lend to Australians (both Australian governments and Australian banks) and this will cause the Aussie dollar to collapse. Furthermore, the unwinding of the carry trade will also smash the Australian dollar.

A great deleveraging and unwinding of the carry trade occured in late 2009 at the height of the GFC. During this great period of deleveraging, the Australian dollar collapsed to the point where A$1 = US$0.65. However, there was a recovery in the stock market, the American government started to print money like crazy, and now the Australian dollar has soared against the US dollar where A$1 = US$1.01. I feel very superior to the Americans at the moment because this means that my salary in US dollars rises a lot and I admit a guilty pleasure of mine in my spare time is to browse through Wikipedia and check out the median incomes of people in certain states and counties in America and then compare my income to their income. Because the Australian dollar has soared so much, my income converted into US dollars is approaching the median incomes in many of the exclusive areas in America! This means I have become rich according to American standards! (I know I am not really rich and that this illusory wealth is just a product of American money becoming worthless.)

One thing we can look at is what happened in the last deleveraging when the Australian dollar. Some people suggest that buying American shares is a good idea if you want to protect yourself from a falling Aussie dollar. But the graph below shows that the American stock market--as measured by the S&P500 index--collapsed with the Australian dollar.

What can you do? The graph above suggests that gold is a good idea. Even the GFC struck, stocks fell, and the Aussie dollar plummeted, the price of gold in Australian dollars went up.

This analysis is purely technical and looks only at historical data. It does not look at any fundamental reasons why gold would be a good hedge against an Aussie dollar collapse. Personally I believe that those who are worried about an Aussie dollar collapse should convert Aussie dollars into both US dollars and gold (physical gold or gold ETFs). But I don't necessarily believe the Aussie dollar will necessarily crash. If Australians continue to pay their mortgages, then all should be fine. Even if they cannot afford to pay their mortgages, surely the Australian central bank will lower interest rates.
Posted by Norak at 11:55 PM No comments:

How can these principles of public finance help us with personal finance? Personal finance is similar to public finance in that often an individual wants to save money for the future but is tempted to go on spending binges to fulfill needs like food as well as wants like intimate relationships, family, holidays, and luxury cars. According to behavioral economics, the dual-self model is used to explain how often an individual will behave as if he has two selves. One self is the sensible, long-term thinking self (the long-term self) who wants to exercise, wants to save up money, and so forth. The other self is the impulsive and short-term thinking self (the short-term self) that wants to spend money via impulse shopping, watching television, eating junk food, and so forth.

All accounting is for the sake of fulfilling the need for a principle to be able to monitor and control the actions of an agent. In other words, accounting is a necessity in principle-agent relationships. In managerial accounting, financial statements are used by managers and executives to allow them to monitor their workers. In public finance, financial statements are also used by politicians (who work on behalf of the general public) to monitor the public sector or the bureaucracy. In personal finance, because of the economic insights of the dual-self model of human behavior, financial statements can be used by individuals to allow the long-term self to monitor the short-term self. In other words, the relationship within an individual person between the long-term self and the short-term self can be modeled as a principle-agent relationship, and the insights we can get from other forms of accounting (e.g. managerial accounting and public finance) can be used to improve personal finance.

Posted by Richard Supez at 10:05 AM No comments:

It is my opinion that a great investing opportunity exists in AREITs, so I plan to start investing in AREITs.

One of the reasons for this, according to Lonsec, is that Vanguard, which employs passive management, offers low fees compared to those funds that employ active management: Page 7 of Lonsec's review states the following: "[A] majority of funds are still charging relatively high fees for low conviction 'active management'. This is disappointing, given that most managers hold over a third of their portfolios in the Westfield Group.... To this end, Vanguard has retained its 'Highly Recommended' rating. This rating reflects Lonsec‘s confidence in Vanguard, should advisers choose to invest in a low-cost, index fund in this asset class."

However, Vanguard's management fees that it charges for its managed fund (0.90% per annum for the first $50,000 invested) is much higher than the fees it charges for its AREIT ETF (0.34% per annum). Furthermore, APN AREIT Fund's management fees are even lower than Vanguard's (0.85% per annum where no adviser remuneration is paid) (Source, APN AREIT Fund PDS, p. 1). To top it off, Vanguard's fund pays distributions half yearly whereas the APN fund pays distributions monthly. As of 2 December 2010, the APN AREIT Fund's current yield is running at a phenomenal annualized rate of 9 per cent!

One of the supposes strengths of Vanguard's AREIT fund is the fact that it tracks an index. But as Lonsec pointed out in its report, this AREIT index is about 40 per cent made up of the Westfield Group. Why pay Vanguard 0.90% per year in management fees to essentially invest in Westfield? There is little diversification. APN, however, are "index unaware," which means they are not constrained by having to follow some index. This allows them to seek out value, maximize diversification, and minimize risk -- and they do all this with lower management fees.

I am not saying I don't like Vanguard. I believe they offer a good diversified bond fund. I am also invested in their high yield fund, although I am not satisfied with this investment as it claims to pay monthly distributions but in actual fact seems to pay zero distributions every third month. Quick calculations of the last few years of distributions received reveals that Vanguard's high yield fund only gives a running yield of about 4 or 5 per cent per annum, which is quite disappointing for a fund that is described as "high yield." This may not be the fault of the fund manager and can be blamed on market conditions, but nevertheless it certainly is disappointing for investors.
Posted by Norak at 11:20 PM No comments: