Super Genius on the Housing Bubble

Someone on Youtube who calls himself Super Genius (because he has multiple degrees and an IQ above 170) explains the housing bubble in America. He claims that property is one of the worst investments because houses experience no technological improvements. A house is just a house. Nothing changes about the house. Because of this, we can expect a house to rise in line with inflation. Companies like Microsoft on the other hand add value with new products and innovations like Windows XP, Hotmail, etc.

Property developers can add value to a house through renovations, although Super Genius claims that this comes from the cost of the developer. That is, if you put $10,000 worth of renovations into the house, the house's intrinsic value goes up by $10,000 only, which means you don't make any money from this. I do believe that a swimming pool by itself is worth less than a swimming pool near a house and so proximity of the pool to the house does indeed add value.

Adding a pool to the house adds value because it appeals to those who like luxury. I do believe that most houses fulfill a very basic need, which is accommodation, and as such we won't see pools in most houses as it is a luxury good. As far as accommodation is concerned, it's a very basic service that I don't think you can improve on. There can be improvement in luxury and aesthetics, but accommodation won't see any improvement. This is why I believe units are cheaper than actual houses and why units don't offer much capital growth potential.

Urinating While You Drive

I remember a few months ago I was driving to work. When I drive to work I have to drive 25 kilometers to the city, so going to work and back eats up 50 kilometers from my car.

Unfortunately for me I drank too much water before leaving home. Because of this I was busting to urinate while on the way there. The problem was that I didn't know where the toilets were. The traffic was also very bad.

I arrived at work just in time, rushed to the toilet, and relieved myself.

Learning from my mistake, today I have thrown an empty 2-liter plastic milk bottle in the back seat of my car. If I ever have to urinate during a trip I will pull up at a deserted residential street and urinate in this milk bottle.
Posted by Norak at 12:34 PM No comments: 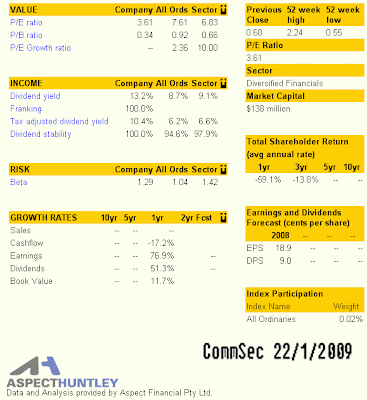 I was browsing through Commsec and realized that the listed investment company Global Mining Investments Limited (ASX:GMI) has a dividend yield of 13.2 per cent. This seems incredibly high and makes me wonder whether mining and energy stocks are good value now that commodity prices are down. If emerging economies like China and India pick up again in the future, we will certainly see demand for raw materials needed to build infrastructure.

Good value in GMI relies on dividends remaining high. In the current environment, that is not certain. Maybe within the next few months we will see many companies starting to lower their dividends.
Posted by Norak at 11:44 AM No comments:

According to an article in the Wall Street Journal (Yearly Job Loss Worst Since 1945), the job losses we are seeing now are the worse since the Great Depression.

Looking at the graph provided, it looks as if construction jobs are worst affected, which makes sense given the collapse of the real estate market. Interestingly, government jobs seem to be unaffected by the recession. 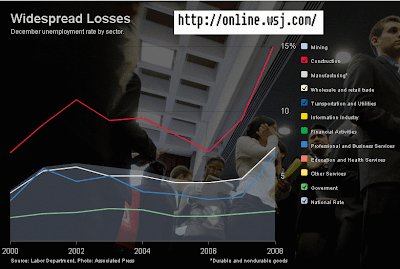 Now that we are in a new year, the world is going through what looks like a deflationary recession. Deflation is feared by economists because there is little they can do about it. If we have inflation, the central bank can raise interest rates or increase taxes. When there is deflation, central banks can lower interest rates, but once interest rates hit zero, it can't go any further.

Now that everyone is worried about deflation (and some people worried about future hyperinflation), I am still worried about stagflation, which is a combination of economic stagnation and inflation. This means that you are likely to lose your job, the share market performs poorly, and to make life difficult, the price of everything goes up.

The chart below compares for the last two years the price of oil (measured using USO, the oil commodity ETF), the price of food (measured using DBA, an ETF that tracks the prices of wheat, soybeans, corn, and sugar), as well as the S&P500 index (GSPC). To measure the performance of the real economy, I should probably be using GDP figures, but using the S&P500 I think is good enough. 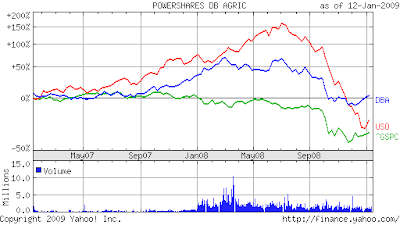 At about May 2007 what we see is a divergence between the S&P500 and the price of oil and food. Oil and food go up while the S&P500 stagnates. This is stagflation. Just about everyone was complaining about expensive food and oil. Many were talking about peak oil.

Then at about October 2008, we had a violent transition from stagflation to deflation. As the chart shows, everything went down. The share markets tanked, food prices fell, and oil prices especially plummeted from about US$160 to around US$35.

How can we protect ourselves from stagflation? One method suggested is to buy precious metals like gold and silver. Below is a chart of oil and food prices against prices of gold (measured using GLD, the gold ETF) and the price of silver (measured using SLV, the silver ETF). 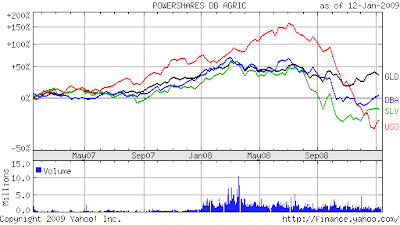 What is also interesting is that during the transition from stagflation to deflation, silver prices went down with food prices. However, gold prices seem to have held up. Gold investors don't seem to have realized that stagflation is over now.

Could gold be overvalued? Perhaps it's time to short gold.
Posted by Norak at 10:11 AM No comments:

I have been thinking of about buying some gold, but instead of worrying about where in my house I should hide it, I was thinking about buying gold mining stocks instead. Australia's biggest gold miner is Lihir Gold.

Looking at the price of Lihir Gold shares, it is clear that the company's share price seems to move together with the Australian market (the All Ords index) more than it does the price of physical gold. 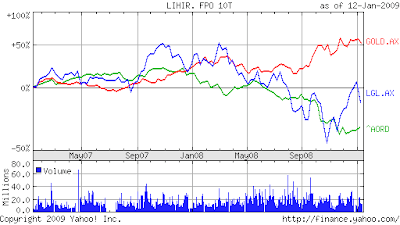 How to Bury Gold

I don't have any gold, but I wish I had because gold seems to be the only asset going up at the moment. It is true that gold has gone down in the last year but in the last 5 years it has gone up a lot. I think holding 50 per cent gold and 50 per cent cash should protect you whether or not the economy is going through deflation or inflation.

Gold is purchased because investors fear that currencies like the US dollar could collapse. If this happens, civilization itself could collapse, and gold would likely be the new currency.

Dave Ramsay believes that investing in gold is a waste because gold has historically performed badly and because, in an end-of-the-world scenario, survivors are likely to use barter instead. I believe that there will be room for barter but the problem with barter is the need to establish a double coincidence of wants. This makes barter inefficient and is the reason why money is used today. When you go to the petrol station to buy petrol you do not pay with apples grown in your backyard because the petrol station owner may not want apples.

If you buy gold, one question that pops up is how to store it. If you store it in a safe deposit box in a bank, problems can arise. If civilization collapses, banks will likely collapse.

If you keep the gold in your home and hide it around the house, thieves can steal the gold. There is a good chance they will use metal detectors to find your gold.

I recommend investors diversify. Keep maybe a third of gold in safe deposit boxes in various countries. Then bury your physical gold bullion.

I recommend investors buy a huge field of land in the country. Then dig thousands of holes in the ground. Bury the gold (or silver) in only some of the holes. Only you should know which holes the gold is buried in. Then get some copper bullion and bury these in the other holes. Copper is normally much cheaper than gold. If a thief tries to dig to recover the gold, he is likely to find lots of copper, which will mean that he will have to work a lot to recover a little. If you know which specific holes have the gold then you can recover it with more efficiency.

Let me give a numerical example. Right now gold is selling for about US$800 per ounce, which is $16 per pound. Copper is selling for $1.50 per pound. Suppose you have 1000 holes. Each bar or coin of gold or copper you have is one pound in weight. You have 100 pounds of gold and 900 pounds of copper. This means that in total all the precious metal you have buried will equal $2950 in value. Suppose also that it takes one hour to dig a hole.

If you didn't know where the gold is hidden, you would have to spend one hour on each of the holes, which means you will spend 1000 hours digging and you will get $2950 for it. This means you earn $2.95 per hour. Not much. Suppose instead that you knew where the gold was buried. Then you will spend only 100 hours and you will make $1600 worth of gold. This means you earn $16 per hour. This is better. (You will leave the copper in the ground because it's not worth it digging it up and it's only there to fool the metal detectors.)

You can change these numbers around a little. Maybe bury more gold together, have more holes, and so on, and you can configure it so that the payoff of knowing where the gold is is so much higher than not knowing that any thief would not bother trying. If the payoff from knowing where the gold is hidden is $100 per hour but the payoff from not knowing is, say, 1 cent per hour, then a thief would likely go find someone else to rob.

While you're putting copper and gold bullion in the holes, I recommend throwing some seeds in there so that you can make some money off the field. Maybe grow some coffee plants and then sell it to others in exchange for gold or silver. Gold is an inert metal, so it shouldn't harm the plants. I not sure about silver and copper. I know for sure that too much copper in your body is not good for you.
Posted by Norak at 10:32 AM 1 comment:

Here in Australia they are starting to sell E10 petrol you can fill into your car. E10 is 90% petroleum and 10% ethanol. E10 is cheaper than normal petrol but less efficient. You can use it in any normal car with fuel injected engine without conversion. Most ethanol is produced in America and Brazil, but I think it would be great if, like tea and coffee, ethanol can be created in very poor countries and consumers can opt for a fair trade brand, allowing motorists to support employment in poor countries while driving their cars.
Posted by Norak at 4:11 PM No comments: