According to an article in The Age titled State could be big loser in tax plan, the Commonwealth government is thinking of forcing states to get rid of inefficient taxes such as car registration and land transfer duty. It will achieve this by tying GST payments to the states' progress on tax reform. The launch of the GST was supposed to remove inefficient taxes, but what eventually happened was the states simply kept these taxes. By linking GST payments to progress on tax reform, the Commonwealth can effectively force the states to reform their tax systems or suffer the consequences.

Most taxes on transactions are inefficient because they distort economic action. For example, land transfer duty prevents a company from moving its business to better location because of the costs. For an employee who works full time, land transfer duty puts a huge cost on relocation, which means that if he has to travel for two hours everyday to get to work he may choose not to move closer to work due to land transfer duties.

A tax like car registration is completely unfair because you pay approximately $600 regardless of whether you do a lot of driving or do very little driving. The amount you pay should be based on how much damage you do to the road, which is why I think getting rid of car registration and making up for the lost revenue with an increase in fuel tax would be great. The problem is that the states cannot tax fuel, only the Commonwealth can.
Posted by Richard Supez at 1:53 PM No comments: 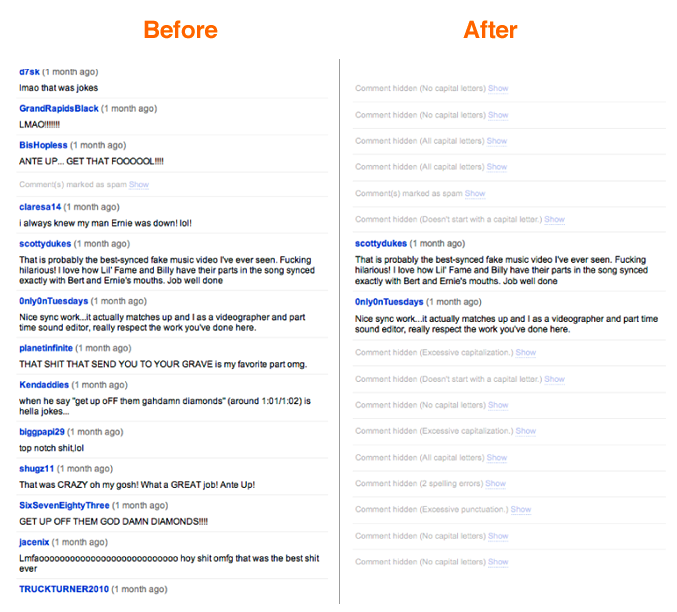 I hate it when I'm watching a movie or show online on Youtube and then someone reveals a spoiler in the comments. I also hate how Youtube is filled with vulgar comments. Thankfully, I have found a solution. It simply involves having Firefox and installing an add-on called YouTube Comment Snob!

This add-on not only allows you to block all comments but also, if you want, allows you to filter out ones with too many spelling or punctuation mistakes, which ensures that the comments that remain are likely to be the more educated ones. I would recommend this add-on for teachers who want to block vulgar comments so that Youtube is safe for children.

Image: waxpancake
Posted by Norak at 10:19 AM No comments:

The Age has published an article titled The problem with oversharing: why burglars like you using Facebook. The article suggests that if you posts something on Facebook that burglars will know exactly where you are and, if you are not home, they will go into your house and rob it.


IT SEEMS harmless enough: announcing your holiday plans on Facebook or uploading that dinner party photo to Twitter. But according to cyber safety experts, such posts are a gift to burglars and stalkers. ''Not only are you telling me where you are, you're telling me where you're not,'' says cyber safety consultant and former police officer Susan McLean. ''And I could get that photo, run it through a program and find out exactly where it was taken.'' One New South Wales family learnt just how dangerous this can be when they were robbed at knifepoint recently, hours after their daughter posted a photo of her grandmother's savings - in cash - on Facebook. Just before midnight, two men broke in and demanded to speak to the girl, who was not home. They then stole money and property from her terrified mother.

It is certainly possible that you can reveal your location by posting pictures to Facebook, but how Facebook differs to a website is that it is not open to the public unless you allow it to be. Only people you approve to see the pictures can see the pictures you post. And if your friends are the ones robbing you, you should not be approving them on Facebook to see your photos anyway. If you don't know whether your friends are burglars or not, posting a picture on Facebook is no different to if you handed a physical photo to that friend, only Facebook is far cheaper and efficient. The problem therefore is not Facebook but that you shared photos with a friend who you shouldn't have.

Posted by Richard Supez at 2:02 PM No comments:

My love of chess

I have been a chess player ever since I was a little boy. I learned to play chess against an old computer program and when I started to join chess clubs in primary school and high school I quickly found that I was okay at it. I became obsessed with chess and eventually became the chess captain at my high school. When I left high school and went to university, I also continued to play chess at the university's chess club, but found that my passion for the game waned considerably, probably because the players at the Melbourne University Chess Club were really good, and I was tired of constantly being beaten. After university I started work and continued to shun the chess world, only playing every now and then. After I received my first smartphone, the HTC Desire HD, I installed chess apps on my phone and found my passion in chess reignited!
For those interested, my favourite chess apps on Android phones are Chess Free and Chesspresso Free. Chesspresso allows you to play chess against people from all around the world, giving each player normally two days for each move. Chess Free, on the other hand, is what I use when I want to play a quick game of chess against the computer.
Posted by Richard Supez at 3:59 PM No comments:

Apple is up to no good again. In an effort to impede the success of Samsung's flagship smartphone, the Galaxy SIII, Apple is suing Samsung.

Apple should focus on making phones. The fact is that just about all phones are copies in that they take existing technology and improve it. The iPhone is not original and copied technology e.g. the touchscreen and app idea came from the IBM Simon. The iPhone 4S is definitely an improvement on the IBM Simon, but nowadays the 4S is an overpriced dinosaur. For the same cost (or slightly more) you can get far more powerful smartphones e.g. the HTC One X. This is just natural evolution of phone technology.
Posted by Richard Supez at 9:53 PM No comments:

There is an article on The Age titled Facebook smartphone? Dumb idea that criticizes the idea that Facebook may create its own line of smartphones.

The article states that there is not much money to be made in smartphones. According to the article, there are two ways of making money in the smartphone industry: the Apply way, which involves creating a phone that is worth $150 and then selling it for $800, thereby making huge profits and making Apple one of the biggest publicy owned companies in the world; the Android way, which involves creating a phone at a cost that varies from $100 to $800 and selling it for only a little bit more, thereby making small profits.  The article assumes that Facebook will opt for the Android way and maybe use the free and open Android operating system or create its own operating system and gain market share by heavily subsidizing the phone and lowering its cost considerably. Facebook intends to make money by gaining large market share and then putting ads on the phones.

I don't think this is a bad idea. However, the article states that this is a poor idea because Facebook is already integrated in most Android and iOS phones. This may be true but Facebook does not control the prices of these phones. Rather, Apple, Samsung, HTC, and so forth control the prices. If Facebook makes a phone, it can subsidize heavily and undercut the rest.

I wouldn't mind buying a supercheap phone and have ads on my Facebook. I'd rather see ads on my Facebook than pay more money on a phone. Comparing smartphones with 1GHz processing power only, currently you can buy a iPhone 4S outright for about $800. You can buy an HTC Desire HD smartphone with 1GHz processing power for $380 outright and unlocked. Suppose Facebook offered a smartphone that was only $150 outright and unlocked with Facebook installed with ads. I certainly would buy it. In terms of value for money, it makes sense. Anyone who is smart with money will do the same things. Facebook will steal customers from Apple, Samsung, and HTC phone users and make more money from advertising revenue. Sounds very smart to me.

Posted by Richard Supez at 3:30 PM No comments: