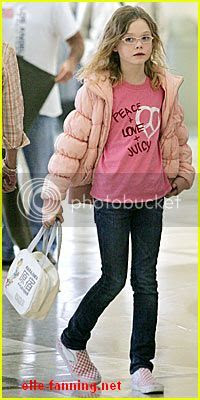 It looks as if Elle Fanning, little sister of Dakota Fanning, is wearing glasses now. I don't know whether she's short-sighted or long-sighted though. Elle's sister Dakota played in War of the Worlds alongside Tom Cruise. Elle herself has been in many movies, such as Because of Winn-Dixie, Deja Vu, and Babel.
Posted by Norak at 2:32 PM

Elle is short-sighted. She confirmed it on Jay Leno show recently. She wears glasses and contacts.
Hope I've been helpfull:):)

Great feed! Visit cyber lord via Email (hackingloop6@ gmail . com)call or text  on WhatsApp + 1 484 540- 0785   if you need to hire a professional hacker for any type of cell phone or social network infiltration,keeping tab on your kids and employees,upgrading your credit score,clearing of unwanted records and so on. Customer service and efficiency is top notch.