"I learned too late that you need just as good a brain to make a crooked million as an honest million. These days you apply for a license to steal from the public."

~Lucky Luciano
Posted by Norak at 8:08 PM No comments:

During lunchtime of 24 May 2011, I decided to take a stroll through Fitzroy Gardens in Melbourne, Australia. Although it was somewhat cold, the sun was shining, and the leaves were falling.

Meerkats and Baboons at Melbourne Zoo

I went to Melbourne Zoo on 15 June 2011 and saw meerkats, baboons, plus a number of other animals. The meerkats are cute and the baboons have hideous red bottoms.

Many of these points are very worrying. Firstly, let me tell you how I think carbon tax and carbon tax compensation should be structured. The carbon tax is designed to reduce our carbon emissions. To do this it will increase the price of carbon emissions, thereby punishing people for polluting. However, increasing the cost of living will hit poor people hard. Rich people can survive if cost of living increases but poor people may not be able to. To fix this problem, carbon tax compensation is necessary. The best way to structure carbon tax compensation, in my opinion, is via the low income tax offset (LITO). The LITO actually targets poor people. If you are poor (i.e. you earn less than $30,000 per annum) the government will hand you $1500 as of 2010-11. If you are middle-class (i.e. you earn between $30,000 and $67,500) the government will give you a portion of this $1500. If you are rich (i.e. you earn over $67,000 you get nothing). To target poor people, the government should think about increasing the amount paid to low-income individuals via LITO, i.e. increasing the amount paid from $1500 to, say, $3000 or more. The government can also increase the LITO threshold so that middle-income people who will become poorer because of the carbon tax will have the purchasing power of their money compensated for by getting higher net pay.

Someone on the internet made the argument that compensation for the poor will not work becuase rich people will compensate for a rise in cost of living by demanding higher pay. Companies will then give in to these demands and to compensate they will increase prices, which will further hurt poor people. This argument assumes that everyone has perfect ability to negotiate what they want without compromise to maintain their profits or standards of living. If this were true it would lead to prices increasing ad infinitum. If companies do increase prices of their goods as a result of rich people demanding higher pay, then all workers, seeing that prices are going up, will then demand higher pay, companies will give in and increase prices even more, which will see workers demanding even higher pay, and this continues on and on until prices and wages increase all the time. In the real world, when workers demand higher wages, they may get it but they may not because companies may reject the demand. When companies have a reduction in profit, they may increase the price of goods to compensate, but this might scare away customers to a rival company. When many companies and individuals face lower profits or standards of living, many of them take it because there is no other option.

What is wrong with the policies of the major parties?

A major worry is that petrol will not be included in the carbon tax. I assume that this will mean that coal companies and gas companies will be taxed but oil companies will not be taxed. The government may claim that this policy helps low-income people who need petrol to drive to work. However, if the government would just increase LITO, poor people would have more money to be able to take a rise in petrol prices. The problem with exempting petrol is that it doesn't discourage people from driving less and many companies that previously may have used natural gas or coal will simply switch to petrol. We will see petrol being use to power up a barbeque and petrol being used in power plants rather than coal. I am worried that people will see this as a loophole and pollute at the same rate by simply using petrol.

Another worry I have is with the way the tax is collected. The tax will alledgedly be levied on companies as they emit the carbon in Australia. For example, if a company burns coal, it has to pay. But what if this company exports that coal to, say, Indonesia, burns it there under a jurisdiction with no carbon tax? Companies will move overseas and coal, gas, and oil will simply be exported and emitted overseas to avoid the tax. To fix this problem, a carbon tax needs to be levied on the energy content of exports. This will counter the argument many people have that the carbon tax will have no impact because Australia makes up only 2 per cent of the world's economy. If a carbon tax is levied on energy content of exports, this will raise the world price of energy since Australia is a major resource exporter. A higher world price of energy will reduce carbon emissions all over the world, and it will send a signal to other major energy-exporting countries like Saudi Arabia, Russia, and Brazil that governments can collect good revenue from a carbon or energy tax. It is within the interests of those in power to have a carbon tax. Some argue that if China and India, the world's most populous countries, do not agree to reductions in emissions, there can be no progress on worldwide emission reduction. I disagree. China and India are not major energy exporters. They are net buyers of energy, and buyers do not set prices. Sellers set prices. What matters is that Russia, Saudi Arabia, Australia, Canada, and Brazil do with the price of energy. If the price of energy is increased with a carbon or energy tax, there is nothing India or China can do but accept it. An agreement to increase the price of energy worldwide does not need the consent of all countries. It only needs the consent of a few major energy exporters, and because these countries have a lot to gain from what is essentially price fixing and anti-competitive behaviour in order to increase government revenue, there is no reason why they wouldn't do it.

Tony Abbott said the following: ''At the next election, the Coalition will deliver tax cuts that are not just compensation. It will be a tax cut without a carbon tax. Our tax cuts will recognise the cost of living pressures that are hitting families and small business hard. Our tax cuts will be designed to restore people's hope, to reward harder work with higher pay.''

Essentially, the carbon tax is starting to look like a tax that takes money from the rich and give it to the poor. The Liberals, on the other hand, will simply cut taxes, and the rhetoric above that the tax will "reward harder work with higher pay" suggests that there will be greater tax cuts for the rich.
Posted by Norak at 11:28 AM No comments:

Debt is slavery; capital is freedom 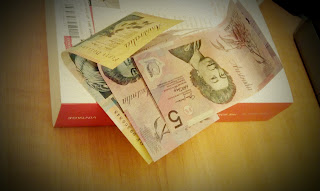 I would like to talk about the importance of investment income, e.g. dividends on shares. In these tough economic times, many stock market investors are starting to realize how important dividends are. When I talk about dividends, I am referring to shares or stocks, but I also value income from other types of investments, e.g. interest from term deposits or bank savings accounts and rental income from real estate.

A bird in hand

Why focus on income? Why not focus on capital gains when investing in shares? Income you receive when you buy shares is a tangible sum of money that you receive from the company, a signal from the company that they are financially secure. Capital gains, on the other hand, is normally out of the hands of company management and is the result of complex external forces. A company can be poorly managed yet still have massive increases in capital gains.

If you invest in shares and get double-digit capital gains every year, just before you retire you will be sitting on a comfortable nest egg, but then the stock market crashes and you lose everything. If you invested in shares that had negligible capital gains but paid out double-digit dividend yields (e.g. some utility and telecommunications stocks pay high dividends) then even if share prices go down, you still would have received regular income for fifty years that went towards improving your standing of living. Income is safer. When a company pays you regular income, it is a signal from them that they are profitable

When we look around, we see people working hard to earn income. We see the Aussie battler working 60 hours a week as a garbageman to pay off the mortgage and feed the kids. We see the laborer toiling away in China assembling mobile phones for $100 per month. There are a small number of people who love their jobs, but surveys show that for the vast majority of us, work is painful. Why do we put ourselves through this torture? Why don't we say no? The answer is that most of us are wage slaves. We work because we have to pay off debt. If it is not credit card debt, car payment, or mortgage debt, it is to feed the kids or to feed yourself. When I talk about debt in this blog, I talk about more than credit cards and mortgages. I use the broad definition of debt, which is the "future obligation to pay." That is, having children puts you into debt. If you are born and you need to eat, you are in debt. Because we all need to eat and because we all need shelter, we are all from the moment we are born denied freedom and we become wage slaves.

"The rich rule over the poor, and the borrower is slave to the lender." Proverbs 22:7

With regards to my own life, I am at the stage now where I am still working and investing, hoping to one day generate enough income from my investments so that I can cover the costs of living. This attitude towards life is not easy. The cost of living can change, and income from investments is not always predictable, but nevertheless it is better to attempt to escape from slavery than the be picky about the minor problems associated with living as a free man.

Posted by Richard Supez at 8:11 PM No comments: