The Greatest Argument Against Having Children: Human Corruption

I am definitely more liberal than conservative. I generally find conservatives nowadays to be very hateful, e.g. Trump supporters (and other conservatives) seem to mostly be Nazis who view non-whites as inferior, and many of them are sexists as well who subcribe to men's rights activist (MRA) or manospherean beliefs believing that women should be subordinate to men. Many of these MRA manospherean conservatives (e.g. Roosh Valizadeh) actually believe that on private property women should be allowed to be raped. I have heard that in schools nowadays many young boys who are influenced by conversatives values are literally grabbing young schoolgirls by the pussy and sexually harrassing them thinking this is normal traditional masculine behaviour, which is a sad state of affairs. Men in power should set a standard of proper gentlemanly behaviour for other men to emulate. I personally think we should all be treated fairly and with dignity regardless of your skin colour or your gender. I think that the divisiveness that in politics nowadays is not going to help the world in the future, which will be plunged into war, chaos, environmental disaster, and this is the main reason why I don't want to ever have any children. If I go have a child, not only is it expensive to have children (one child costs US$1.1 million over your lifetime) but my child will grow up in a world filled with racism, sexism, religious extremism, division, hatred, and environmental degradation. With the way international politics is going, there will likely be a future nuclear war that destroys all of humanity. If my child doesn't suffer, chances are the generation after that will suffer or be eradicated, so to bring an innocent child into such a corrupt world is tantamount to child abuse, so it is better to never have children, which will save me and my future wife millions of dollars, which will allow us to live life to the fullest, to travel the entire world and see unique cultures and natural beauty while it lasts because the way the world is going now, it is clear that humanity is nearing its end. We must live our lives to the fullest while we can and bow out before humanity self-destructs and implodes due to excessive greed, ego, and aggression.
Posted by Richard Supez at 5:11 PM No comments:

Garbage in the Sea in Bali

I am currently in Candidasa in Bali where I have noticed that there is a lot of garbage not only on the streets but also in the beaches. Supposedly the garbage here is not only from Bali but also from other Indonesian islands such as Java. The current moves the rubbish to Bali. There was a program set by the Indonesian government to ban single-use plastic, but there was little willingness by people to follow it. This is why it is important for people to stop or reduce single-use plastic. Plastics in the the ocean break down and dissolve into the water forming microplastic particles that can end up in fish and humans. 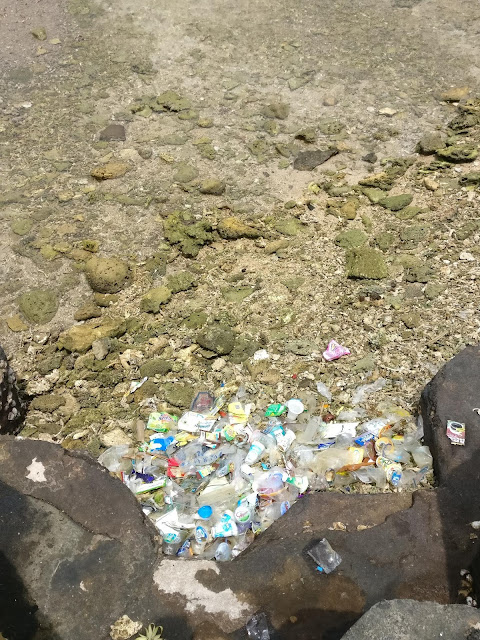 Posted by Richard Supez at 4:02 PM No comments: