There are many who believe that eating a plant-based diet will leave them protein deficient.

It is easy to understand why many would believe this is the case. Below is a list of food ranked by the PDCAAS (protein digestibility corrected amino acid score), which is the measure of protein quality used by the World Health Organization. The list comes from Wikipedia.


Any food with a PDCAAS of 1.0 is a "perfect protein." In 1990, the FAO/WHO decided that "proteins having values higher than 1.0 would be rounded or 'leveled down' to 1.0 as scores above 1.0 are considered to indicate the protein contains essential amino acids in excess of the human requirements."

As you can see on the list, there are plenty of vegan options on that list that are equivalent to animal products. For example, rather than eat beef (0.92) you can eat soy (0.91). Rather than drink whey protein (1.0), you can drink soy protein (1.0).

However, someone eating, say, black beans, may believe that he would become protein deficient because black beans have a PDCAAS of 0.75.

However, people generally don't eat the same food all the time. A key limitation of the PDCAAS is that it doesn't take into consideration the fact that if you eat two or more foods with low PDCAAS, the combination of these foods can create a perfect PDCAAS of 1.0.

This concept is explained in the article: "[G]rain protein has a PDCAAS of about 0.4 to 0.5, limited by lysine. On the other hand, it contains more than enough methionine. White bean protein (and that of many other pulses) has a PDCAAS of 0.6 to 0.7, limited by methionine, and contains more than enough lysine. When both are eaten in roughly equal quantities in a diet, the PDCAAS of the combined constituent is 1.0, because each constituent's protein is complemented by the other."

Posted by Richard Supez at 11:30 PM No comments:

There's nothing wrong with soy milk. The studies show that soy reduces the risk of prostate cancer in men, and in women it reduces the risk of breast cancer. The cancer risk reduction is caused by the phytoestrogens in soy. The scare that phytoestrogens feminize men is also overblown given that the affix "phyto-" means "plant" and plant estrogens have weak to no effect on humans. It is animal estrogen such as estradiol in dairy milk that has been shown to reduce testosterone levels in men, and there are many studies that suggest dairy milk may increase prostate cancer risk although this is not conclusive. Bottom line is if you're really concerned, just drink almond milk. 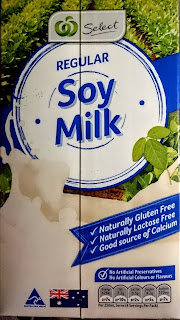 Posted by Richard Supez at 11:36 AM No comments:

Last night I watched Black Mirror on Netflix. I watched an episode called Nosedive, which I thought was brilliant. Basically it is about a woman living in a social media obsessive world where everyone is given a rank. Everyone wears smart contact lenses that have facial recognition software, so when you see someone, you instantly know what their social media rank is. Social media rank is used to discriminate against people. For example, hardly anyone talks to those with low rankings. What is horrifying about this episode of Black Mirror is that this is not too different to how the world works today. We have social media ranking us all the time, although it is not as sophisticated as it is in this movie. It might be easy to think that you can simply delete social media apps from your phone and be done with it, but it’s not as simple as that, in my opinion. Social media is not the problem, I think. The problem is that, in order to be financially successful, you must be a conformist. People have been conforming and showing off and putting down others ever since the dawn of humanity, but social media merely allows us to do it with greater efficiency.

Most people just accept it. “It’s how the world works,” they would say, or they’d say, “You have to play the game.” This is true, but only in the early stages. In my opinion, you need to conform initially in order to save up enough money to buy enough ETFs to live off dividends, but once you are living off dividends, you are a free man, and you can do what you want.

You must be a slave in order to escape from slavery.
Posted by Richard Supez at 12:39 PM No comments: